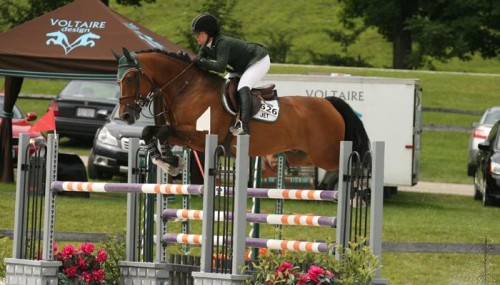 This week, Torano was the only rider to leave all the rails in the cups over the track set by Canadian course designer Michel Vaillancourt, although at the expense of two time faults.

“I watched the low classic go before me, which was the same course, and I wasn’t paying attention to the time,” Torano admitted.  “The jumps came up pretty fast and there were a lot of bending lines, so I think I just started concentrating on making the lines right and not cantering through my turns like I normally would.  When I had the two time faults, I was like, ‘Oh my gosh, really?’”

She continued, “Other than that, it rode nicely.  The course was nice and flowing and was a nice smooth course.  I didn’t really get to watch anybody else’s course, but I think the rails came down easily around the course.  I was lucky enough to not have any rails and just have time faults!”

Herault is a new ride for Torano, but the seven-year-old Belgian Warmblood gelding by Heartbreaker has a special connection to her.

“He’s a full brother to Vancouver D’Auvray,” said Torano, referring to her 2009 World Cup Final mount.  “The breeder called us and said that he had Vancouver’s full brother and he thought he would be good for us, so we went from there.  He was right!  It’s been really fun.”

With Torano, Vancouver was highly competitive in the grand prix ring, and she was thrilled to see that Herault is strikingly similar to her former mount.

“The way he goes is very similar to Vancouver,” Torano noted.  “Vancouver played a lot, he was a stallion, but the way Herault jumps; the feeling is very similar.”

She continued, “I like that he’s compact, like Vancouver was.  He’s little, but he has a big stride.  His jump feels amazing and easy.  He’s actually really, really fun to ride.”